When you do an in-place upgrade of Windows to Windows 10 Feature Release whatever it removes the RSAT tools and you have to re-install. Instead of our IT staff going to download it every time, I put it into SCCM as an available advertisement to our IT staff. I followed this post by Nicolas Pilon @ SystemCenterDudes over it and it has worked great until Feature Release 1709 (16299) came out.

Microsoft has a specific version of RSAT for 1709 and you use the previous (same link!) Windows Server 2016 release for older versions of Windows 10. This presented a small issue that was addressed with multiple Deplyoment Types for the Application.

First step is to create a Global Condition for the Windows 10 Build version for which Jörgen Nilsson @ CCMExec covers. This actually will be useful for other tasks around Windows 10 and technically will pull the build for any version but is only really relevant on Windows 10 platforms. 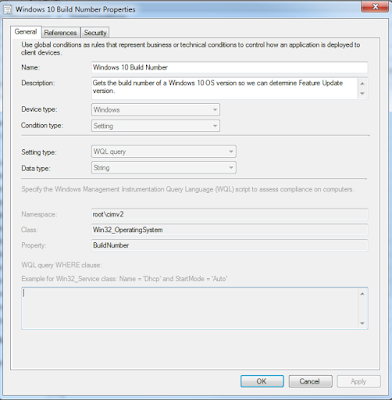 For each we use two requirements set appropriatly.

To keep it simpler each MSU is in a seperate folder source so when 1803 (whatever the next one is called) its easy to add or change. Maybe Microsoft will make RSAT version agnostic.