Now that I am very close to making Windows 10 available to the masses I have begun the polishing phase. Edge is not ready for us yet so until that point, I need to change the defaults from Edge to Internet Explorer. However we want Edge to be available for anyone who wants it so LTSB was out. I dont want to remove it, just make IE front and center until Edge is ready. I am looking to change this

which should be easy right? Not so in Windows 10. It was a brutal process to get going. In previous Operating Systems its a no big deal and even in W10 its easy to do to AFTER the first login if you transition from the default user to touching existing user profiles. The key being initial login. Whatever the process is that is the  "Hi"... "Were glad your here"... stomps over several settings made to default user regardless of you using CopyProfile or making specific changes to the profile during deployment in the Task Sequence.


My first method was to use verbs (overview) for the items I want to remove and pin. It has worked well in Windows 7 and since the taskbar returned in Windows 10 I thought it would work. It does work post initial login for any legacy programs. However Edge, being a modern app does not have verbs.  To give examples of working with Modern Apps, to create a shortcut for Edge you would use this:

Or this if you want to goto a specific site:

So using verbs failed because I could not unpin Edge or the Store and the "Hi"... process stomps all over it anyway.

Since that did not work I will just have to go oldschool and set it up on a donor machine and then import via the Task Sequence.

Two areas of focus. One is this registry path:

In this location you have several binary (REG_BINARY) values so its easier to export it from a donor machine and import then to do a 'REG ADD' of each one individually.

The second is this file path:

This houses the shortcuts for the items on the Taskbar. Note that these are only used for the icon bitmaps and not the actual launching, that is handled by the 'Favorites' Binary value in the registry location above.

This works if you import it and copy the files, though you do need to log out and back in or restart explorer.exe. For deployment purposes the "Hi"... process stomps over it during first login and sets the Tasbar to the initial screenshot above. Its nice that it will add your slot 3 and on pinnings so the Store icon can be gone. Not so much what I am looking for however.

I also learned that "Hi"... will remove any 'Internet Explorer*.lnk' files it finds under the %APPDATA% User Pinned path. I tried various incarnations such as 'Internet Explorer 11.lnk' however IE11.lnk is not removed. It just means when you right click the Taskbar icon it states IE instead of Internet Explorer. Not everyone knows what IE is so had to work another solution for this part.

In a Task Sequence, you import the reg file and the shortcuts to the paths above modified for the default user which I cover below.

Now we get to try RunOnce instead of Active Setup. This works! downside is a 2-3 second delay after loading the desktop for RunOnce to call the script. It works so I'll take it for now until I discover a more elequent method of mitigating the "Hi"... process

For the package you need a few things from the donor machine. After setting up the taskbar they way you like you need to export this path in the registry to 'Taskband.reg':

You also need to get the shortcut links from here and put them in a folder called 'TaskbandShortcuts'. If you browse to it you'll find that the 'User Pinned' folder is hidden. You do not need to make this hidden in the package as the first login will take care of this.

After that you would create the script to populate it by copying the below content into 'Taskband.CMD'. During initial login a DOSBox will pop up running the below for 2-3 seconds. It copies the shortcuts into the users profile at the path above then imports the registry file we created and restarts explorer.exe, otherwise a logout and login is needed. Any language will work, I chose CMD since its simple.


Last up is the reg file to put in RunOnce to set this all up. Under the default user RunOnce call the CMD. Call it TaskbandRunOnce.reg.


Couple things of note with this RunOnce reg file. One is 'DefU' in the path that I will cover below and the other is the command itself. REG_SZ does not numerate variables so thats why I am calling it with 'cmd /c ...' so that it will enumerate the userse %TEMP% variable. You could instead create this as a REG_EXPAND_SZ and call any variables in the command however it is a binary so it looks funny in REG files as shown here. This example simply calls '%TEMP%\Taskbar\taskband.cmd".


Now that the package is setup we have to get it going in the task sequence. Very simple once you see it.

In my deployment TS I have a group called Registry changes and in it we mount the default users registry along with make any changes to HKLM then unmount it. All the Defualt user stuff is grouped together and ran after the HKLM stuff. 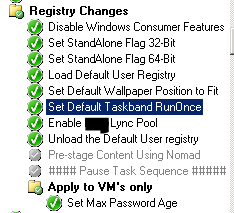 and now anything affecting the default user registry just gets any HKCU reference changed to 'HKU\DefU\'. Once done unmount it via another Command Line step with

So for the 'Set Default taskband RunOnce' reg setting its just a command step to import the TaskBandRunOnce REG file we created earlier with the Taskband package mounted in the step.

Another option would be to do a 'REG ADD...' command vs importing a file and I may switch to that in the future. I did the REG in case I ever change to using a REG_EXPAND_SZ value.

Now that we have the RunOnce primed to run upon first login we need to get the Taskband content into the default user. For that is a simple copy command step called 'Copy Taskband Shortcuts to Default Profile Temp'.

All done. To take this polishing a little further I also modified the default browser to be IE and Johan had this process written up so I wont rehash it here.

Additionally I customized the Start Menu itself. Bill Moore did a great job writing that one up as well. I will say that the "Hi"... process removes any references to IE in Start so to get around that I just mount the above package via a step and copy the 'Internet Explorer.lnk' to the default user start menu and on the donor machine I pin that shortcut to the Start Menu.