Like many, I use Pi-Hole to help block ads and telemetry. Both of mine run on tiny VMs, setup similar to my Unifi controller. Ubuntu with 2 core/512M memory/5GB storage. I happened to look at my parents instance and had a that's not good moment.

98%??? What is going on here? Normally it's in the 20-30% block range. So I go scrolling down the admin page a little and there's this spike around 6AM. A big spike. A really big spike.

This has a feel of some nefarious malware going on. Did my parents join a botnet?

Looking further in the GUI, there were two hosts that caused the jump in lookups. 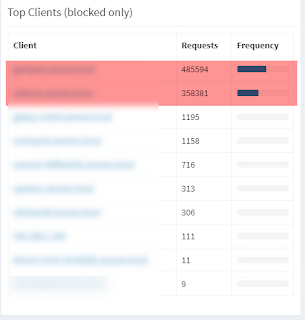 Both of the top ones are Domain Controllers. At this site, DHCP hands out only the Pi-Hole server and the Pi-Hole is configured to query the DCs for local DNS and Active Directory. They in turn are configured to use the Pi-Hole as their upstream instead of the roots as is the default.

Trying to dig into the logs via the GUI was not going anywhere. There was just too much data and it kept timing out. I did not do any command line parsing of the logs here; thought I'd start with the basics since this was a recent occurrence. The first thing I did was to check all the Windows systems with things like MBAM and Crowdstrike tools, and I looked at the DCs way more closely. Nothing was found. Next was to make sure everything was using the Pi-Hole for DNS. All the Windows devices were, except the DCs; they are set to best practice which is to point to the other than themselves. Note this was the IP of itself, not loopback (127.0.0.1). When I reverted this change, I used loopback.

Back on the Pi-Hole, I found several names that concerned me, places their environment should not be going to, so I started adding those to the blacklist in Pi-Hole. Another day, new hosts in CN TLD. 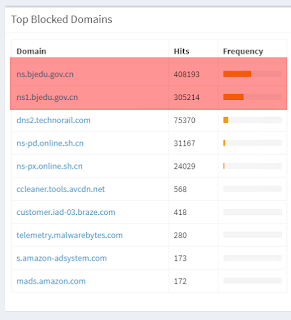 The two SH.CN hosts became #1 and #2 after I blocked the two highlighted ones above.

The light above my head went off. I only looked at the Windows hosts, not the rest. So I go see what DNS they point to. ESX was using the DCs so I changed it to the Pi-Hole. My backup Linux server was using the Pi-Hole, and both DCs.

Linux does not have the concept of primary DNS and Secondary DNS, just DNS Server 1, 2, etc. At this point I performed a cardinal sin in tracking problems down – I changed multiple things. Ugh. I changed this Linux box to use Pi-Hole only. Secondly, I changed the DCs to point to Pi-Hole as primary and the other DC as secondary. I also turned on DNS logging on the DCs. The next day lookups dropped exponentially but were still high around 6AM, with around 6000 lookups instead of the nearly billion. All PTR records. That's strange. The DNS logs in the DCs only showed normal traffic for the Active Directory domain with a few Microsoft domains being forwarded to the Pi-Hole.

Exactly what I expected to see from them, however this pointed me to the troubled host – my Linux backup server. The problem is my Linux box. Again, I thought nefarious malware. Ugh, how? It’s a stripped server install and only I use it. Going back to the Pi-Hole logging is usable again and it shows the spike from my Linux box after 6am. The spike starts at 6:25am and stops at 6:32am. I concurrently was in my email and notice my daily logwatch had a timestamp of 6:32am from that server. Logwatch parses all your system logs and sends you a nicely formatted email of what happened that day. So I get on it and see when logwatch would run. Its script is located in /etc/cron.daily and that is scheduled to run at 6:25am according to crontab.

I remove logwatch script from cron.daily and the next day, no spike in lookups. I have a sigh of relief. It’s not compromised, just misconfigured. Looking at the logwatch email, the fail2ban section was most of it. For some reason my parents’ ISP gets scanned a lot more than mine. Partly due to me using GeoIP via PFBlockerNG in PFSense and them using a commodity router. This backup server does have SSH enabled, certs-only, no logins. I use fail2ban to block brute force SSH attempts. It adds the IP to the firewall blocking them after X attempts by watching various log files, and it has a module for logwatch.

I'm not finding anything in its files, so parsing fail2ban wiki I find this article around DNS lookups. Sure enough, /etc/fail2ban/jail.local, use_dns is set to Yes. I change it to No and the daily lookups drop to around 1000. I checked another system and it was set to warn. I changed it to No as well. I don’t care what DNS reports back from these IPs doing the scanning.

All happy now and back where expected.

There is still a small spike but much more tolerable.

So what happened? While Logwatch was the root cause IMO, DNS misconfiguration was what happened. Fail2ban shows thousands upon thousands of SSH login attempts. Someone smarter in DNS than me would have to confirm or deny, but my theory is all the DNS servers did multiple lookups per record and none liked the NXDOMAIN response. My server looked it up against Pi-Hole. It didn’t like the response, so looked up against DC A. DC A in turn looked up against DC B, which went upstream to the Pi-Hole. It didn’t like the response so it went to its second server, itself. DC A in turn went upstream to the Pi-Hole. My server didn’t like the response so I went to DC B, which in turn went to its primary, DC A, which went upstream. Then DC B went upstream. Finally, my server stopped once it exhausted all its DNS servers. I need to draw this out!

Regarding my concern around the CN TLD, many of the IPs I researched, those hosts were the authoritative DNS for them. This partially explains why they were so high in the query lists.

So I recently updated a document for someone on how to perform their monthly Microsoft patch cycle within ConfigMgr and thought I would share it. Some info has been changed to protect the innocent.

How does yours compare?

Read more »
Posted by Kevin Fason at 4:45 PM No comments: