I was helping a friend with a ~800 endpoint ConfigMgr 1706 instance on Windows Server 2012 R2. Windows 10 1709 was made available via SUP to start testing the process. In initial testing by IT they were reporting it erroring out. 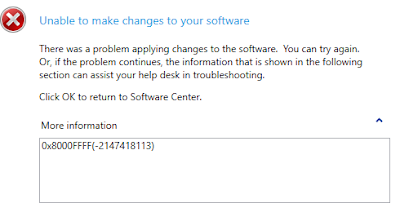 That was real helpful (not) so we went looking in WUAHandler.log It didn't really say much either.

Since it was reported by a few IT staff I suspected it was most likely back-end related so lets start at the top. Sure enough, WSUS was not at a supported version.

Its should be 6.3.9600.18324 or higher. It appeared that KB3159706 was not applied and the post tasks not done per its KB. Simple enough, lets go get it from the Update Catalog and apply it and cleanup. We ended up getting an error it does not apply.

So after much investigation, it appears that KB2919355 is at fault. There were several installed KBs that stated '(Not including KB2919355)' in their title. This system being the sole SCCM system it was being patched by itself so this was odd as it should be completely patched. It had KB4054519 (December 2017 Cumulative Rollup) on it which does update WSUS version to 6.3.9600.18838. Only if KB2919355 is present however.

If you are unaware, KB2919355 is also known as 'Update' or 'Update 1'. Think legacy Service Pack here. We therefore have to back out enough to get KB2919355 installed then we can install KB3159706 to get WSUS up to date and bring it back to current patch condition.

Before continuing I would highly push that you take a snapshot of the VM or backup if physical. We did have one of the restarts lock up during shutdown and had to power cycle it. If I do it again I would probably restart after each uninstall instead at the end.
Install KB2919355. When you download this there are several files and it needs to be done in a specific order shown under 'Install Instructions'. Before doing that however, it also states you need to install KB2919442 as a prerequisite. This KB has been superseded by several updates but you can validate you have a newer Servicing Stack installed with the latest being KB3173424.
Once you installed all the components of KB2919355 above you can finally install KB3159706 and perform the post install tasks needed to support in-place. This KB will take WSUS to 6.3.9600.18324 so it will support in-place ESD files. You can also run msinfo32 and check the HAL which should be 6.3.9600.17031 for KB2919355.

I have always had to manually add the ESD extension to IIS so that WSUS will transfer those files. Not needed for SCCM installs but should be done. Open IIS Manager and navigate to SERVERNAME | Sites | WSUS Administration | MIME Types. Add esd with MIME type 'application/octect-stream'.

Finally we applied the latest cumulative, KB4054519, as of this writing.

Now that we are current, we get to cleanup WSUS as it is a dirty state. Before KB3159706 it didn't know how to handle the Upgrades category. You need to rip all that out of the database and let it resync. Luckily there is a great article by MS on what to do to get WSUS clean. Note that step 3 and 4 can take a while. This WSUS instance had all the languages for Windows 10 upgrades in it which was weird when only English was selected.

Once this was all done and cleaned up, upgrades were going to the test systems again. WSUS was at version 6.3.9600.18838 and the HAL was at a good version. I also disabled all the ConfigMgr services during this work since there were may restarts.