Now that Windows 7 is EOL after receiving its final patches on the 14th, I went on to update my AIO (All in One) install with one that is 99% patched.  If you are unaware, it's just an Install.wim with several indexes. There are many reasons to still use Windows 7 so having it start up initially being patched already is a time saver and smart security-wise.

My Current AIO has all versions from Starter up to Enterprise however it excludes K and KN versions. I never expected to use those under any circumstances. I only installed Starter to see what it was about.

First is to update it, which Jason Sandys covers in great detail and all credit to him. He covers how to create a slipstreamed WIM that has the majority of updates injected to save a ton of time and be safer. I started down the road of a simple bat file to inject updates via DISM but Jason's script is way more intuitive and powerful.

While he wrote it in November of 2019 there are a few newer patches to apply. I just modified his script to change the KB numbers. You could also append the Jan 2020 final cumulative after applying the November 2019 one Jason covers.
Or for the relevent lines with original ones commented out.


Once you have the updated WIM ready to go you can create the AIO. There are many ways to create one. I just use dism to export a single WIM into the AIO WIM but this link shows a few ways to do it. GIMAGEX is another option I like to use. For dism its pretty simple. I adapted Jasons folder structure.

Once your Final AIO WIM is ready you can create the ISO for VM use or the rare case of burning optical media. With the injected updates the WIM is over 4GB in size so it will not fit on a USB stick formatted with FAT32. I talk about this in relation to Windows 10 here and my need to use optical media for it. For USB, Windows 7 does not support a second NTFS volume however you can just split the WIM using dism. In my case this WIM is 6.7GB so I have to replace install.wim with install.swm and install2.swm. This also means I have to burn to a DVD9 (Dual layer) instead of DVD5 (single layer). You could make a 64-Bit only if you never anticipate using really old hardware.


I did all this on a Windows 10 Pro workstation. For the ISO file creation, you will need to install the ADK relevant to your OS. In my case the 1903 version since I am on 1909. This gives you the oscdimg.exe executable needed to generate the ISO file for your new AIO. On my 1903 ADK its located in Program Files (x86)\Windows Kits\10\Assessment and Deployment Kit\Deployment Tools\amd64\Oscdimg\. An example command to generate an ISO file. 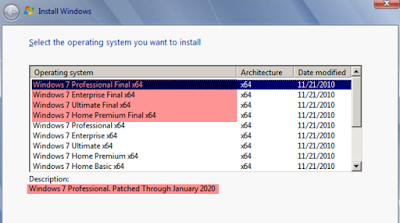 As long as Windows 7 has been around you may also want to inject newer storage drivers into the Boot.wim so it can install Windows 7 on newer storage controllers. I touch on this while getting Windows 7 on an unsupported AM4 Ryzen 3 system personally. Several motherboard manufacturers have a tool to inject drivers needed for newer hardware into the boot.wim so you don't have to track them down. ASUS, MSI and ASROCK to name a few. You can do this yourself with dism and the add-driver switch. This is also useful for the NVMe and/or TPM 2.0 patch as Microsoft pulled it so you can install Windows 7 to NVMe storage.If you have them, you can inject the NVMe and TPM 2.0 updates into the install WIM as well. I talk about NVME and Windows 7 here.

With Microsoft charging for support past its original end, this Final may not be really the final. See what that entails!

This script is provided as-is; no warranty is provided or implied. The author is NOT responsible for any damages or data loss that may occur through the use of this script.  Always test, test, test before rolling anything into a production environment.

I created a script to do all the work you can use. Not very pretty but it will get the job done and can be easily modified. It will perform the following: