Ever since the in-place Task Sequence was made available in 1511 I have been unable to create one via the wizard as I get this fun error: 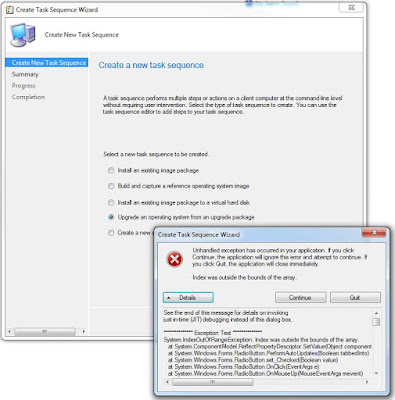 Every other one worked, just not the upgrade (in-place) one. I usually create them from scratch so went that route and tabled getting this fixed. Originally I thought it may be a bug thats resolved in a newer release such as 1602 or 1606 so I checked again after upgrading to each of these versions. Received the same error so nope still broke, so once upgrade to 1606 we put in a Premier ticket over it with Microsoft.

They also thought it was a back-end issue so we provided dump after dump and log to no resolution. Once we were ready to upgrade to 1610 we tabled the ticket until that was complete. After 1610 the problem was still present so more dumps and logs submitted. Finally, Microsoft Support came back and had us uninstall and reinstall the console on the primary server. Fixed! In turn we reinstalled the console on the workstation systems it was installed on as well and those were fixed.

So this problem was NOT with the back-end infrastructure but with the local console install itself. All of our consoles were automatically upgraded whenever we upgraded ConfigMgr versions. Perhaps there is a bad DLL or other support file thats corrupt or not updated during a console update? Who knows. I may look into it some day to understand it. The fix is easy though.

So if you see an error like this, just re-install your console. Many ways to do this so take your pick. One way is via an elevated command prompt and navigate to the primary servers install folder, generally located at '\\SCCMServer\SMS_xxx\Tools\ConsoleSetup'

PUSHD is a nice command to quickly mount a UNC path using your rights if you didn't know. Additionally, you can skip the /q switch to use the wizard. Once that is done delete the install folder which is generally located at %ProgramFiles(x86)%\Microsoft Configuration Manager.


You can remove the /install switch so it runs the wizard. POPD will unmount the share.

In my case I also have 1E Nomad so I had to do a repair via Programs and Features for '1E Nomad Branch Admin Extensions 2012'. Easy fix to a long term problem.