We are working to have our hardware vendor lay our image down for us in their factories. I provide them a Stand-Alone ISO and they muck with it and stick in on the drive for deployment. The Task Sequence still processes however much of it is done before the device arrives on-premises. The software that goes on every computer, such as Adobe Reader, and even stuff targeted to say latops, like a VPN dialer is ran there. Then our HTA and any per unit customization, such as machine name, is done on-premises as well as domain join.

In order to streamline this, they have us make several changes to the Task Sequence. One is a step that runs a "secret sauce" script with two Restart steps surrounding it. This is the point in the Task Sequence that the device is boxed up and sent to its destination. Before giving the ISO to the vendor they have a checklist to test against. They ask that the NIC is disabled in the BIOS/UEFI and the process ran until this special step and press the power button during the second restart step, during POST. Once off, turn on the PC and go into the BIOS/UEFI and enable the NIC and continue the Task Sequence. This emulates both the factory process, that has zero network, and the on-premises part which does. You have to watch the Task Sequence progress and sometimes you miss it and have to start over. Its like watching paint dry at times right?

I unfortunately missed that step a couple times so I devised a dirty way to shut the machine down mid task sequence. When it was off I knew I was at that point in the testing. Two steps is all it takes.


The second is a built in restart step that is set for 90 seconds. Be sure to set to currently installed OS. 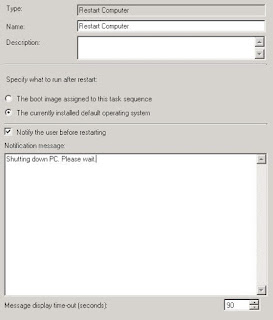 What other uses does this have? who knows, It helped me in my testing so I can multitask and not watch paint dry.